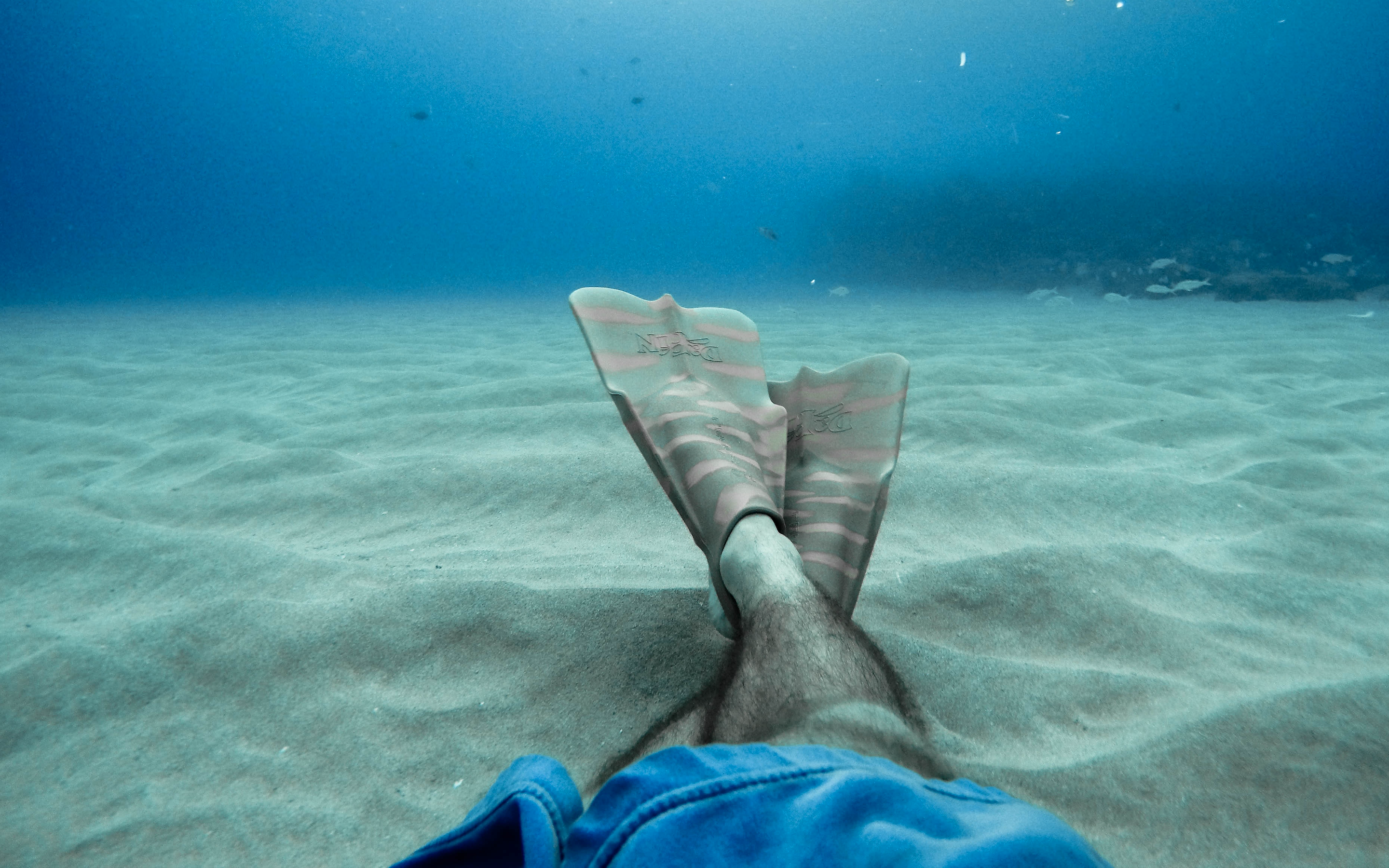 The Importance of Scuba Fins

THE IMPORTANCE OF SCUBA FINS & HOW TO EVALUATE THEM

(aka, an old dog learns something new)
Go to any scuba forum and ask what the most important bit of diving kit people should own, and the answer is going to be “mask”,  “dive computer” or “regulator”.       Makes sense.   Masks are probably the most likely point of discomfort on dives due to improper fit.   A dive computer is the single most important bit of kit that a diver should have, in order to take ownership of their safety (as anyone who has taken a course with me will have heard me reiterate over and over again).    And regulators – well, that is obvious as well.
Now, a little side trip.   I am a gadget freak, but I am also a creature of habit.   Once I find something that works with me, I stick with it.    I have been using Apeks regulators since the late 90s:  they’ve gone ice diving with me, they’ve been inside the Andrea Dorea with me, they’ve endured far more abuse than they should have and they have kept ticking.    Similarly, for fins, I have been using Cressi Masterfrogs since 2000 or 2001.   They are large, they are stiff, they don’t have any fancy technology, but they provide thrust and precision control like no other fins I have used (and have much better buoyancy characteristics in warm water than the only other fin that comes close, the Scubapro Jetfins).     So that’s what I dive with.   But Cressi, in their wisdom, discontinued the Masterfrogs and replaced them with a lineup of fairly mediocre, “me-too” fins which do not stand out in any way.
So that got me looking for a replacement when my current pair, which is 10 years old, finally wears out and I have been trying out various fins from Mares, Scubapro, Apeks and Technisub to find “The Next One” (@TM Vikas Nairi). 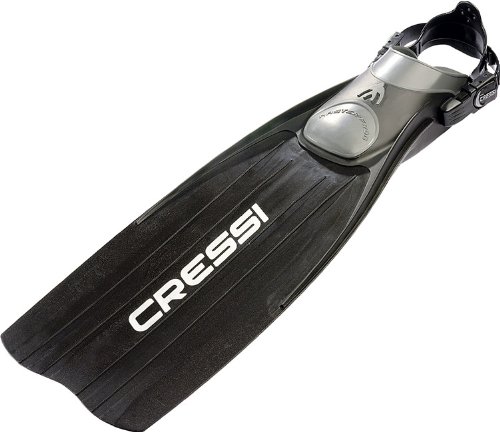 And in my quest, I have realized something:  fins are probably THE most significantly under-rated piece of dive kit.   In theory, we all know the characteristics of fins:   they come in varying level of stiffness, buoyancy and thrust.   Some require faster kicks (equivalent to high turnover/cadence in running or cycling), some require slower, more powerful strokes (my Masterfrogs).    Some are easier to kick but top out at moderate thrust – others provide greater thrust but require more power.   Some are softer and easier on the legs.   Yet others use fancy technology (split fins, gears, channels, springs, etc).    And yet others are designed for flutter kick while some are better for frog kick.
But if think about it – if you rent gear, when was the last time you ever paid attention to which fins you were provided?    I mean, it certainly isn’t something I have prioritized as a “must own” item to other divers looking to buy their gear, focusing on the afore-mentioned 3 items as well.    But recently, I have had a change in my thinking.
This realization was kindled over the course of two separate Diveindia Outbound trips – one to Malapascua and one to Maldives.   In both cases, I was using new fins.   In Malapascua, I was simply unable to get into horizontal trim, despite the rest of my kit being my usual gear.     My legs would keep sinking and since i was diving without any weights, I had no real option to adjust my trim.       That made photography a singularly uncomfortable experience, my air consumption was about 20-25% higher than normal and throughout the dive, I felt as though I was a newly-minted Open Water diver again.   In Maldives, the trim was better but in a current, I outkicked my fins, and possibly for the first time in 2 decades, I was struggling to move in a current (the Cressis havent seen a current they cannot wallop – if a diver has the leg strength to swim against the current, the Cressis will make it happen):  I was outkicking the fins, and working far harder and moving far too slowly than I could/should have. 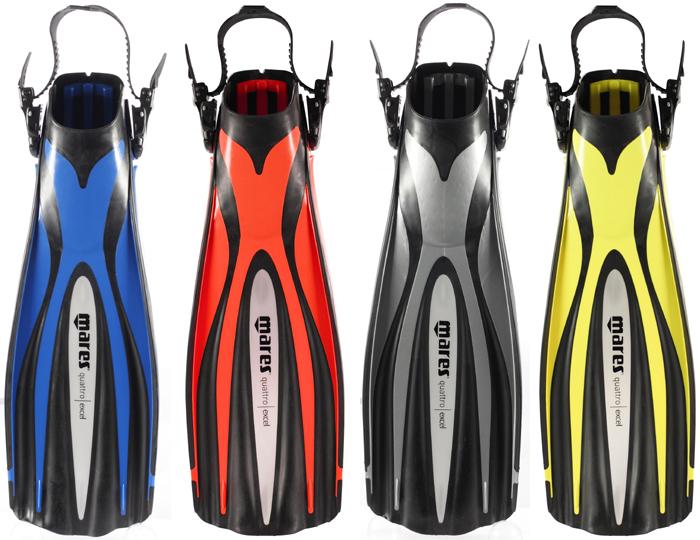 I’ve dived in BCDs that are too large or too small for me (including an XS).   I’ve dived with masks that pinch my nose, regs with super-high breathing resistance and while overweighted by 3-4 kg.   Did I enjoy the experience?  Not particularly, but it wasn’t a particularly big deal.    So while I do prefer the comfort of my own gear, I can make do with pretty much anything that is reasonably close.     Except with these fins – with these fins, it wasnt just a mental thing.   I was physically affected during my diving.
So that got me thinking – if my choice of fins messed up my diving zen so badly, what are the implications for that for all the people who have recently learned to dive, who are going on diving trips and are wearing fins that may not be optimal for them?       To what degree is a diver’s trim (and therefore buoyancy), breathing rate and general comfort level in the water affected by poorly-matching fins?
So we modified our buoyancy specialty in certain cases to make sure we spent time experimenting with various types of fins – and we tried this with divers of varying levels (beginner to over a hundred dives).    And it has proven to be a game-changer for a significant majority of the divers – in most cases, there was ONE Goldilocks fins which just made the entire system (BCD, weight distribution, kicking, buoyancy) work together in a significantly better way.
And really, it makes sense.      Fins may not be very heavy, but they are the furthest item from your center of buoyancy/gravity and so exert the greatest moment on your trim.    A small change in buoyancy characteristic of your fin can have a greater impact than a kilo extra on your belt.     Then add to that your kicking style – do you prefer slower, more powerful strokes or shorter, faster kicks, and which affects your breathing pattern more?      The right fins fix all these issues. 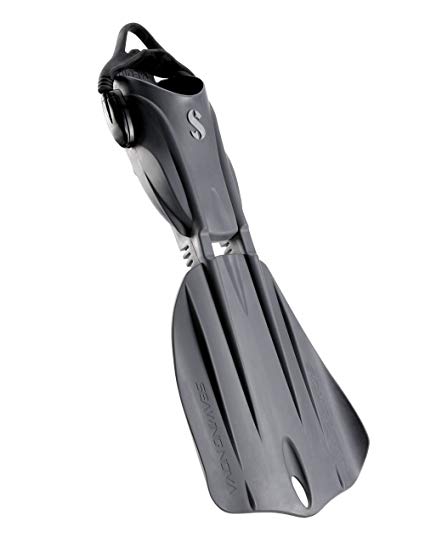 So what is the takeaway for you as a diver?   If you have ever had buoyancy and trim issues, or struggled in a current, look into not just weighting and distribution, but also fins as a source of fixing these problems.     Even if you have not had any issues with currents, it may still be worth trying to find the Right Fin – it may not be as critical but going from an Ok Pair to The Right Pair is very similar from going from being almost properly weighted to properly weighted – it feels significantly better.
So next time you are renting gear, try out a few different fins and see if one feels better than the other.    And to help you with the process, I have created a framework of 5 attributes for evaluating fins.
HOW TO EVALUATE FINS
The following 5 attributes of a fin provide insights into its performance and should help you narrow down on fins that work best for you:
1)  Thrust:   This is a measure of how much propulsion a fin provides with a single kick, and depends on the length of the fin, its stiffness as well as the overall design.
2)  Beat Rate:   This is a measure of how frequently you have to kick in order to get the optimal propulsion.     A direct analogy would be running, where your speed depends on your stride length and turnover or how many steps per minute you take.   Beat rate is the equivalent of steps per minute here, with thrust being the equivalent of stride length.
3)  Stiffness:    This is a measure of how much force you have to (or can) exert per kick for optimal propulsion.   In general, greater stiffness typically results in greater thrust, but manufacturers are always trying to find clever designs to improve the thrust:stiffness ratio.
4)   Buoyancy:   This tells you whether the fin floats or sinks in the water – which can affect your trim.   These days, most fins tend to be more or less neutrally buoyant, although a few notable exceptions do exist.
5)   Bite:   This is a term i have coined to describe how well you “feel” the water when you kick – your proprioception, in other words.     To use an analogy – when you do the front crawl, you learn to develop a feel for “holding the water” in your hand when doing the pull part of the stroke.    Similarly, you have a better feel of the water with some fins than with others.   That is bite.    Why does this matter?   This is essential when you are trying to make small precise movements in limited space – eg, inside a shipwreck or while engaging in underwater photography.
So what does all this mean?
Thrust and beat rate together give you a measure of the propulsion provided by a pair of fins.      You can get the same propulsion by using a high-thrust fins kicked at a low rate (the equivalent of mashing a big gear on a bicycle) or by using low-thrust fins kicked at a high rate (high cadence spinning).      The former is easier on your lungs but harder on your legs – the latter will increase your HR to some degree, but is easier on your legs.
Stiffness tells you how much effort is required to get that propulsion.    Actually, to some degree, stiffness and beat rate are linked – stiff fins tend to lend themselves to lower beat rates, whereas softer fins tend to lend themselves to higher beat rates.   But I feel it is worthwhile enough to keep stiffness as a separate category because it doesn’t just affect propulsion but also leg comfort.   Also, it is possible to “outkick” your fin if you exert a larger effort than the fin’s stiffness allows it to handle – in such cases, it is better to increase the beat rate rather than effort per kick.
The last 2 characteristics aren’t about propulsion but about control and balance in the water.   Buoyancy of fins tells you how it will impact your trim in the water, as explained earlier in this article.      There is no right or wrong attribute here – a lot depends on your trim characteristics (defined by your body and your gear).
And lastly, bite gives you an indication of how much precise control you have in the water with the fins.     I created this term while trying to understand why I liked some fins more than others even though both of them were equally effective in the water.    The words that came into my mind were “mushy” vs “precise” – and it is a significant factor in determining how good a pair of fins feels while diving.
Hopefully, this framework gives you the ability to evaluate fins by yourself.    As a short-cut, we have a recommended list of fins to cover the needs of more recreational divers as well as divers with special requirements.   You can always contact us for more info, to try them in a pool or to narrow down a list of choices.