I just realized it has been a really long time since I blogged anything…. well, that’s the off-season for you.
But this is the sort of blog post that is a lot of fun to write about, as we discovered yet another great site a few days ago. The site is as-yet un-named, but runs from 17-25m. It has the same type of craggy gorge-like features as Johnny’s Gorge (the top dive site of the Andamans, discovered by Johnny, our senior DM a few years ago) and is also packed with fish.
Today was our first dive there, and we found 2 turtles, large schools of reef fish, a massive giant grouper, jacks, etc. etc. The works. No sharks and surprisingly, no barracudas either, but given the location, we expect it to be fairly productive when it comes to teeth-per-fin ratio of the resident fish.
This site should compare to Johnny’s Gorge, Jackson’s Bar and Dixon’s Pinnacle in terms of topography and fishlife.
Discovered by Vikas and Dixon. 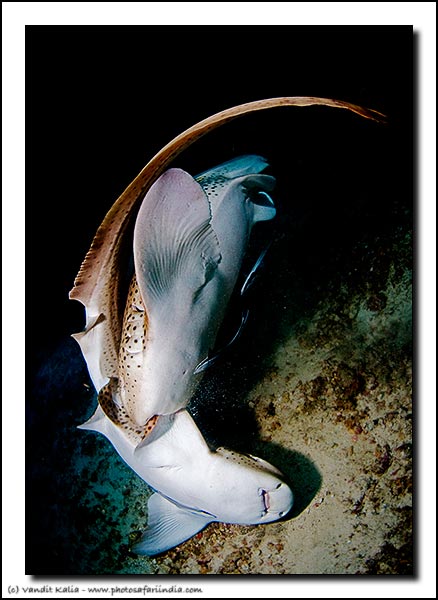 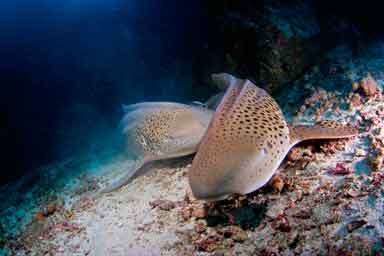 Back in 2002, I was teaching a class at Minerva Ledge with 3 Open Water students.
Back then, there used to be a lot more sharks on this reef and the question wasnt whether we’d see any sharks, but how many and which species. As with most beginners, my students had some concerns about being in the water with sharks, and I gave them my usual spiel: sharks arent dangerous, we are not normal prey, we are too big for most sharks, etc. etc.
We get in the water, and sure enough, we see a white tip cruise by. And then a black tip some time later. By now, my students are converted – they are very excited about the sharks and no longer scared. Towards the end of the dive, yet another white tip goes by – and a few seconds later, one of my students points to the right into the blue and signals “shark.”
I look, expecting to see a white tip and sure enough, there is one swimming towards us. I nod and return to scanning the front, as I am hoping to get a manta today.
Then a small voice pipes in my head, saying “wait a minute – wrong proportions…” I look again, and the shark is coming toward us. Directly towards us. Fins down. Which is an aggressive territorial display.
“Wait a minute,” I remember thinking, “where does a white tip get off being aggressive to three divers”?
Then the initial voice in my head pipes up again “hey… WRONG proportions. Hellooo!”
Right – when looked more closely, this shark just seemed to be a lot bulkier. And not only that, it was a lot bigger. And at that moment, it turned and showed us its size – it was a 4m+ bullshark! Yes, I know bullsharks don’t get bigger than 3m or so – but this was 4m+ and I will stake my diving reputation on it (heck, most people who’ve seen it put it at 5m+, but that is a bit exaggerated). And my divers and I had just been told off in no uncertain terms by Big Guy that we were in his territory. Rather than upset him, we turned around and head back in towards the reef, and that was all we saw of him on this dive.
Over the next few years, Bob the Bullshark would make a reappearance a couple of times each season. Each time, it was at the same site and the same deal: comes straight in, fins down, in a territorial display, turning away a good 10m or so away. We always appreciated the polite warning and would make sure we didn’t hang around for a second pass (and certainly not the third pass, which might involve a “smile”).
And each sighting was absolutely, gloriously epic – there are few things in this world as graceful as an enormous, powerful shark with rippling muscles and gliding by faster than anyone can swim with the merest flick of its tail. It was humbling and it was moving – we were witnessing one of nature’s 2 perfect creations in its element (the other being the crocodile) – and I mean “perfect creation” literally: the shark has not changed or evolved over 350 million years. It is perfect and cannot be improved upon.
The last 3+ seasons, Bob has been AWOL. We put it down to him falling a victim to the local shark fishermen (thanks to the demand for turning this amazingly beautiful animal into soup).
However, a couple of days ago, two of our divers and one of our DMs saw a big shark at a site that is about 250m away from Bob’s old stomping grounds. Initially, we were not sure whether it was a grey reef shark (which has been sighted here occasionally) or a bullshark (which has never been sighted here). Speaking to the divers and comparing notes on size, shape, etc., I am pretty confident it was a big bullshark.
Could Bob be back? I for one certainly hope so – if there ever was a Christmas present that would thrill me beyond belief, this would be it. And at the risk of anthropomorphizing too much, I do wonder if somewhere in that predator mind of his, Bob remembers us?
Welcome back, Bob – we missed you!

Update on the North Andamans safaris

We’ve done a few of the safaris to the North now – and a pattern is emerging:  excellent coral, superlative diving, big fish and a true sense of exploration.   While we are still a ways away from being experts when it comes to knowing what we’ll find (give us the off-season to achieve that expertise!), we’ve can talk about some of the highlights so far.
We’ve been seeing a lot of sharks – grey reefies, leopard sharks, white and black tips as well as an occasional silvertip or two.  We’ve also seen mantas and devils rays, and Sayeed lived up to his Tamil Heart-throb moniker by causing a HUGE leatherback turtle to fall in love with him.
We send Vikas over recently with a video camera and as soon as he is able to process the clips, we will put them online here and on Youtube.
Happy diving!
Vinnie

DIVEIndia is now affiliated with NAUI

While all agencies do a very competent job of training divers, some agencies stand out for taking a slightly different approach. NAUI, which has been a non-profit agency for most of its existence and which even today follows those standards, is one such agency.
With the highest standards for virtually all levels of recreational diver training, NAUI has always been associated with excellence in diver training.
And so it is with great pride that we announce that as of February 2009, DIVEIndia is now offering NAUI certification courses, all the way from basic Open Water (the NAUI Scuba Diver course) up to Instructor.
We are very excited about the added flexibility this gives us in meeting the needs of our customers. Whether you are a beginner who want the best entry level training, a certified divers who want to improve his/her diving skills or an experienced divers who want to master the theoretical and practical aspects of diving, we now have a program that will meet your needs.
Please contact us for more information on our NAUI courses!
Vinnie

Well, we are now officially starting our 5th season in the Andamans.   The first five years have been absolutely amazing – we’ve met some great people who have now become close friends, we have explored the uncharted reefs of this region and we have become India’s largest dive center without losing the personal touch that has been central to our operating philosophy.
It has not all been easy, either.  I have been diving for quite a while, but running a dive center is a completely different thing altogether.  We have made mistakes along the way, but I take great pride in saying that we have learned from those mistakes and gone to great lengths to avoid repeating those mistakes.    Every year, we are a better dive center than we were the year before, in terms of services offered to customers, safety procedures implemented and internal processes.   If I had to pick one thing I am most proud of achieving, that would be it.
I’d like to thank all our customers and friends who have chosen to dive with us.  This year, we have a bunch of exciting new initiatives on tap – new destinations, speed boats, new resort, and more –  and I will be posting regular updates on this over time.  We thank you for making us the #1 dive center in India, and promise you that we will continue to innovate and offer ever-improving facilities to our customers.
Vinnie

Diving in the North Andamans

8 years ago, when I first came to the Andamans, there were 4-5 dive sites in Havelock. When we started operations in the first year, we found a few new sites (South Button, the wreck of the Inchkett and more). Now, after 5 years of operation, a lot of the sites that were being dived in the first year are no longer visited, simply because we have found a lot of newer, better sites: Johnny’s Gorge, Dixon Pinnacle, Jackson’s Bar and more.
Finding these sites was the first big step forwards for diving in the Andamans, because these are truly world-quality sites, and since then, we have continually pushed this frontier forwards, adding a few new sites every year.
Now, we are pleased to announce fully-catered diving safaris to the North Andamans. Through the new locations, we will get access to a host of new sites that were previously the domain of liveaboards only. Personally, I am VERY excited about this development: to me, it signals the second big step forward for diving in the Andamans.
These diving safaris will start from January 2009. Please check the following page for more details:
DIVEIndia – Dive Safaris to the North Andamans.