Left by the tide, right by your feet

Sunny days by the beach are best spent taking a cooling dip in the sea. Wait for the tide to rise and once there is enough water to swim in, make a dash for it. Even better if you have a mask and snorkel to take with you. Now that is what most would say.  But, have you ever waited for the tide to recede before getting into the sea?

What could there possibly be to do or see when there is practically no water, you ask? The short answer to that would be –prepare to be amazed.

The ‘inter-tidal zone’ is that stretch of the ocean that can go from being fully submerged during a high tide, to holding as less as one foot of water at low tides. The receding water gradually begins to expose the hidden ‘rocky shore’ ecosystem- a magical world waiting to be explored. 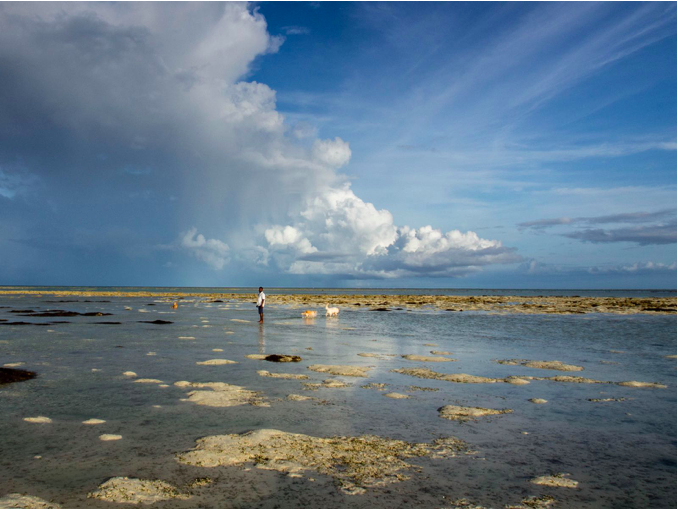 It was a sunny and clear day here at DIVEIndia. Sharmila and I had just rounded up an army of nine kids who had been eagerly waiting to head out for a low tide walk. We had promised them that we would spend all afternoon looking for crazy critters of the sea.

The moment we set foot on the beach, the first questions began coming in. Touching the wet sand, one of the kids asked “Wasn’t the water up till here in the morning?”

Another wondered “Where did all those rocks come from?”, followed by “What made all the water disappear?

We talked about the moon and tides and what makes the pretty patterns in the sand. We spoke about how the intertidal zone is a place of extreme environments. How animals and plants found in this stretch of the sea have adapted to extreme fluctuations in water levels, water temperature, oxygen and salt.

We hopped across the rocks and waded through the shallow pools that formed in between, looking for any sign of movement- something crawling here, something darting there and sometimes, something slithering under our feet. Each time one of us spotted something, there would be an excited “Oh my, what is that?!” and within no time there would be circle of curious kids squatting around the critter that was just spotted. 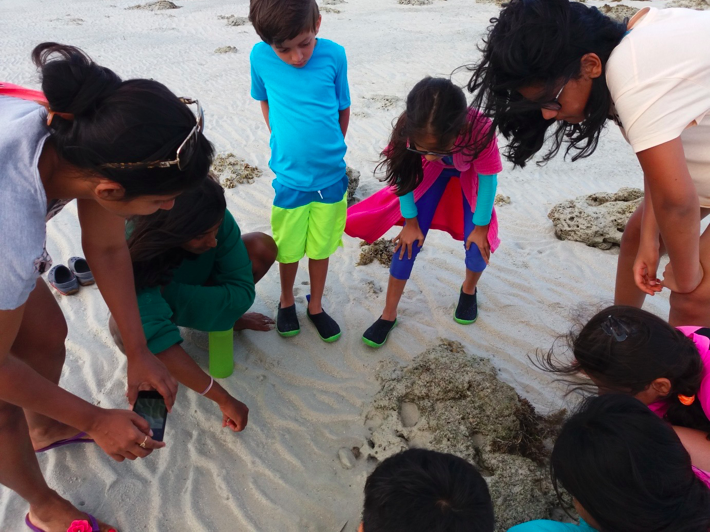 A common sentiment shared by all who have come on these walks with us, kids and adults alike, has been absolute surprise and amazement at how full of life this intertidal space actually is. All we have to do is squat, wait and something beautifully bizarre will emerge right before our eyes. From crabs, wormsand snails to many species of coral, sponges, juvenile fish and marine plants. We’re also keeping an eye out for the occasional mantis shrimp, octopus and sea snake too! 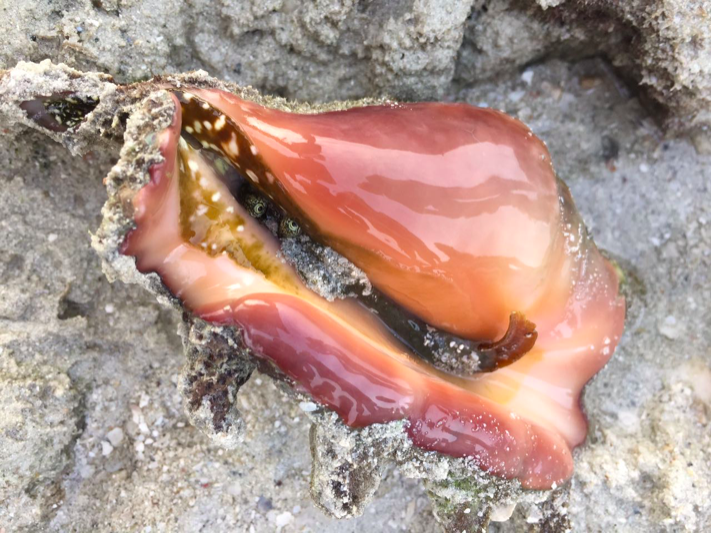 Intertidal walks have also been a great space for conversations about conservation. Looking at the stunning architecture of the rocky sandy shore, yet finding vast tracts of dead coral. Seeing hundreds of hermit crabs scuttling about carrying their homes made of shells lying on the beach, while walking past a wide variety of plastic trash. 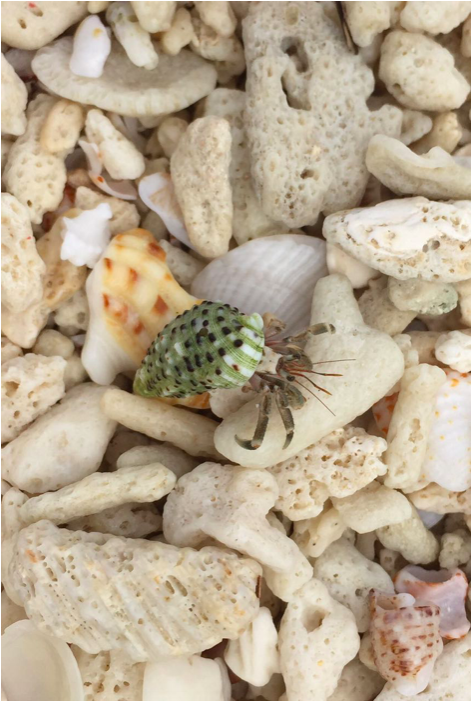 Everyone leaves with a renewed sense of awe, while  also realising how degradation is slowly setting in and wondering what can be done to understand and conserve these beautiful places.

For starters,  as visitors to these beautiful seashore ecosystems, it’s time we start gathering more knowledge than we do shells. 🙂

Read about ‘The Highest Tide‘ a novel by Jim Lynch, our #OceanLove book of the month for July 2018

We now offer a variety of marine ecology programs, both diving (covering reefs, surveys, fish identification and more) and non-diving (covering not just the reefs but also mangroves and coastal eco-systems).    These can be taken as stand-alone options or combined with diving packages.    Please contact us for more information on these programs.

Recently, I cut the mooring line we had installed at Johnny’s Gorge.  We are going back to dropping anchor on that site.
Ironic, really, if you know the background:  3-4 years ago, a diver roasted us on the Interwebz for not following sound environmental practices because we once dropped anchor on Minerva.  Never mind that the anchor line – which *we* had installed on that site, and all the other sites, for that matter) – had been cut by fishermen, never mind that the fact that we’ve been pestering and badgering the various local officials to take action against shark finning and bottom trawling, never mind the fact that we’ve trained various members of the Zoology and Forest departments in diving and marine conservation and that we are even now conducting studies on the recovery after the El Nino effect of May 2010.
Fair’s fair to a point – the new crewman on the boat should not have dropped anchor but should have dived down and hooked it (and had we been told of this immediately instead of reading about it a lot later, we could have done remedial training a lot earlier).
Still, the roasting did rankle a bit, especially when someone who dived with us recently brought it up out of the blue.
Since then, some things have changed.  Fishermen have gotten used to the idea of bottles floating in the water (and there are enough waste plastic bottles on the island now that they no longer feel the need to liberate our floats.  How’s that for a silver lining?).   So our lines are getting cut less often.   And with a few more dive centers around who have the coordinates to our sites, maintaining the lines is getting easier.
However, we’ve always debated whether or not to put up an anchor line at sites like Johnny’s Gorge.  I’ve seen some anchor lines (ours as well as that of other dive boats) rubbing against barrel sponges and it was gut-wrenching.  We have always had a bit of a proprietary/maternal instinct about Johnny’s Gorge, given that Johnny, our senior dive guide, discovered it a few years ago and it is pretty much THE top dive site of the Andamans.  So naturally, we want to preserve it the best we can.   But we also wanted to make sure that the fishermen didn’t discover the site and start fishing there.  Johnny’s Gorge is one of the few sites which still has regular shark sightings and if the shark fishermen get wind of it, we run the risk of losing the  sharks that still remain around Havelock.
After much discussion with other dive centers, we decided to put up a mooring line – although I still had my misgivings.
So it was with a mix of alarm and anger that I came up from a second dive on Minerva Ledge a few weeks ago to see a fishing boat not just fishing on Johnny’s Gorge, but actually tied to our anchor line!  We went up to them and gave them grief for fishing on our dive sites (mostly bluffs, which thankfully they bought) and in the end, decided to cut the anchor line while they were still tied to it.
And we have a new edict at Diveindia – we are not only going to not set up a mooring line at JG, but we are actively going to cut any other lines that are put up there.
This will probably not win us friends with other dive centers, as Johnny’s Gorge requires experienced boat crew to actually hook into the site and a mooring line makes it a lot easier for DMs and boat crew alike.   This also means that I will probably have a few more gut-wrenching incidents of seeing anchors and mooring lines where they don’t belong (although we are taking steps to reduce that risk by choosing GPS coordinates which put us a little bit off the reef).   And it likely means a few more incidents of us being roasted on the internet forums by well-meaning divers with a very simple view on how conservation should happen.
So be it.    These are all risks and costs that I consider justified.
I remember what happened to Junction after we put up a line there – the fishermen from Neil wiped out the reef in about 2 months.  It has been 2+ years and there are still very few fish left on that site.   And I have also seen about an 80% reduction in shark population in the Andamans in the past 10 years.
And I have made a promise to myself to NEVER let that happen to Johnny’s Gorge – not under my watch.
Due to high spam, comments are disabled on this blog, but feel free to chime in with your thoughts on our Facebook page.