Our Journey: 1st Dive Shop in the Andamans

It was a small island, about 2 hours by boat from Havelock, with high, rocky crags, occupied only by a pair of nesting eagles and some egrets, all of whom watched with mild curiosity as our boat got closer.   None of the islanders knew much about it or what to expect around it – diving and snorkeling were absolute novelties back then – and all I had to go on was a sea chart, whose topography hinted that the reefs around this island, called South Button, would be different.   Despite my best efforts to stay calm and focused on the exploration, I could feel my excitement mounting.

The water itself was a bright azure, with gold flecks of sunlight reflecting off it, inviting me in while remaining mysterious – even so close, I still couldnt tell what lay on the bottom, about 80 feet below the boat.   What fascinating corals were underneath?   What reef fish would I see? Would there by any sharks swimming by?   Would there be any turtles or manta rays passing by?

A short while later, I jumped in the water, did my safety checks and gave the “all ok” sign to the boat crew before starting my descent to the bottom: in a few seconds, I would see what secrets the ocean bottom held here!

People with a desire for exploration and discovery live in the wrong era these days.   With virtually the entire world viewable with your finger-tips, thanks to Google Maps, the days of Dr Livingstone and Lewis and Clark are well and truly behind us.

However, to an extent, the oceans present the one remaining frontier where discovery is still possible; but even here, exploration usually involves either a substantial bank account or wealthy backers: boats, crew & equipment are not cheap.   Moreover, the diving industry is reasonably mature and in most places, the days of exploration and discovery are in the past, as most of the dive spots have already been found.   However, the dream remains alive: every scuba diver – an explorer in his/her own way – has visions of going out diving and discovering a new reef or a new dive site, and seeing something that no other human has seen before.

Thus, when a chance trip to the Andamans in 2000, and a few trips out on local hired fishing boats showed me the undiscovered, untapped potential of the place, I was hooked. I took a year off work and spent 6 months here, diving and exploring the blue waters.

Havelock was, in a word, magical – truly pristine in every sense of the word, with only a handful of hardy backpackers making their way over. Life went on, and the fact that a visitor or two had been deposited on the island was of no consequence. There were a handful of rooms available for rent, most of them right on the beach, and unless you brought your own fish, meals were whatever the owner’s wife had cooked (or been persuaded to cook) that day.

Those were truly frontier days – there was no mobile or internet connectivity on the islands, I’d go out on small fishing boats and explore based on intuition derived from looking at sea charts and speaking to fishermen.     On the way back, we’d string a line in the water and catch a trevally or a barracuda, which would be grilled for dinner that night.   Rise with the sun, go out exploring, come back and sleep shortly after sunset.

And in those 6 months, the urge for discovery fueled me to dive like a man possessed, going out daily.   That made for some interesting and some scary times.   I remember going out early one morning to see if we could track whales, which should have been moving up the coast at that time of the year.   We went out into the open sea in a small fishing canoe and started searching – and soon found not a whale but a monster of a storm that came upon us suddenly.   The foaming waves were welling at over 2 meters, dwarfing our tiny canoe as we turned tail and fled before the storm’s wrath.   We made it back ok, but all our gear had been washed off the boat.   And I got a talking-to from both the fisherman and his wife, for my hare-brained obsession with diving, and was advised to give up all this madness, get married and settle down with a respectable job instead.

Sadly, that advice rolled off my back and I kept the exploration going.   And thus it was that a fine sunny summer day found me getting in the water not far from South Button island.

The anticipation didn’t last long – the moment my head went into the water, the first thing I was a large sea snake, gliding by me in crystal clear waters.   I watched it for a while and slowly started descending to the bottom.   Before I could get there, a school of barracuda came swimming by me, slowly and elegantly, their curious eyes watching me as they passed by.   And then, I saw the bottom and my jaw almost dropped: below me, was one of the biggest and varied coral garden I had seen anywhere in the world.   It extended out for about 300m ahead and about 30m wide, with corals growing so thick that I couldn’t see the ocean floor.   And swimming around in this were hundreds upon hundreds of the most colorful and varied fish I had ever seen – far more than in the Caribbean and Egypt, two of the world’s most popular dive destinations, and orders of magnitude better than anything in Thailand.   And best of all – I was the first person to actually see this nature’s wonder.   I still get goose-bumps at the thought.

Fast forward some years.   My sabbatical from work became a career change to start DIVEIndia, and thus, Havelock had its first professional dive center.     We searched for, and discovered more world-class sites which we named after our dive professionals at the time – and as word of Johnny’s Gorge, Dixon’s Pinnacle and Jackson’s Bar started to spread, the diving in the Andamans started to grow as well.

Interesting anecdote about Dixon’s Pinnacle – we discovered it on what was the 8th or 9th drop on that day.   And we managed to save the wrong coordinates in the GPS.   The next day, I took a couple of divers out there, who were all excited by the prospect of this amazing site… and ended up diving a rock that was about 2 feet high and 3 feet across. Hmmm, this sure looked a lot bigger yesterday, I thought to myself while my bemused divers gave each other looks as if to say “ok, this really is not THAT interesting”.  So on the surface interval that day, I had to go “discover” Dixon’s Pinnacle all over again.

And not long afterwards, the frontier days started to come to an end.   More dive centers set up shop, and diving has now become an industry, with an ever-increasing number of visitors coming to experience the underwater world: and with good reason.  Right here in our background, we have some of the best diving in the world – no need to leave India!

There are places elsewhere in the world which may be better in any given area: more big stuff (sharks, mantas, etc), a great variety of soft corals, or more macro life (the amazing array of incredibly colored and shaped critters).   But very few places combine the same range of species – everything from tiny to giant – in one place, and especially in such high densities.   The absence of excessive fishing (long-lines, large nets) has meant that the fish density in the Andamans is higher than most places in the world.   A dive could turn up a couple of sharks, a large turtle, a few hundred barracudas, a few giant groupers, a school of twenty trevally hunting on the reefs, a few tuna in the background and of course, all the usual denizens of a reef: fusiliers, octopii, butterflyfish and angelfish, wrasses, parrofish and the ever-popular clownfish.   And this would constitute a typical dive!

However, Havelock still represents only a fraction of the underwater world in the Andamans.   Neil Island, just to the south of islands, has escaped the notice of most visitors, and still retains the same untouched look and feel of Havelock from a decade ago.     And then there are the entire uncharted north Andamans, especially the atolls on the western coast of the islands, where my research indicates the presence of a few shipwrecks, and where the whale migration comes very close to the islands.     So while the frontier may have moved, it isn’t gone – and I for one am already planning our next exploratory expedition to the north, where a Japanese ship was sunk by Allied bombers during World War 2, and should be resting in 45m of water, a snapshot of the past awaiting re-discovery!

[Vinnie is a NAUI Course Director, SSI Instructor Trainer and PADI Staff Instructor, and has been awarded the Platinum Pro rating, given by an independent committee to only a handful of the most experienced instructors in the world.   He is the founder of DIVEIndia, the oldest and largest dive center in the Andamans, and has been diving in Havelock since 2000]

We were featured in the Man’s World Magazine – Glossy! 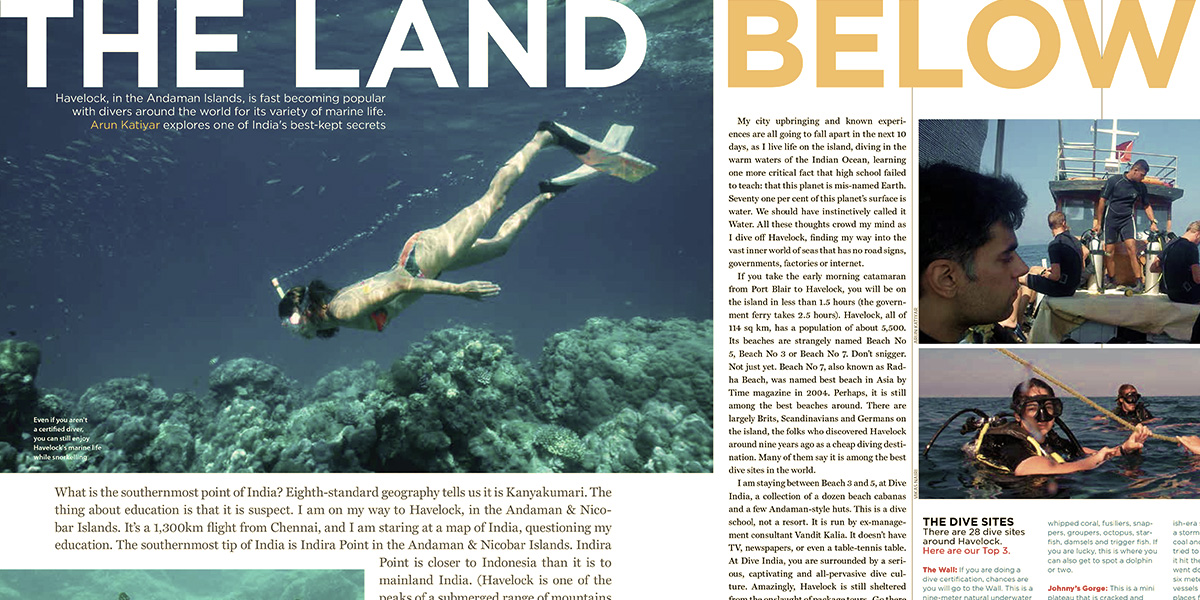 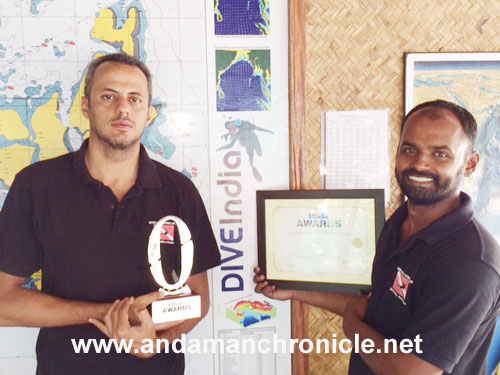 Port Blair, March 28: Andaman’s oldest scuba diving center ‘DIVEIndia’ has been awarded India’s Favourite Adventure Tour Operator, based on a poll of over 7500 readers of Outlook Traveller magazine and website. Vandit Kalia, Managing Director of the company, was presented with a plaque and a certificate by Shri Parvez Diwan, Secretary of Tourism, Ministry of Tourism, Govt of India, at a function held in New Delhi.

The poll, validated by IPSOS, is an authoritative benchmark of consumer preferences in the areas of travel and tourism, including hotels, airlines and holiday destination and is part of an annual survey conducted by Outlook Traveler Magazine.

Commenting on the award, Kalia said, “This award goes to each and every person of the team, all of whom have quit corporate careers to pursue their passions – we strive to offer the highest quality scuba diving services and at the same time retain a personal touch, and being recognized by our guests for this is one of the most rewarding things for all of us, especially as it comes during our 10th year anniversary”.

DIVEIndia has been operating in the Andamans since 2003 and has established itself as one of the leading dive training agencies in India, offering training programs all the way from beginner to instructor. It celebrated its 10 anniversary in December 2013, and has plans to expand operations to cover all major Indian cities.